A couple of years ago a handful of auto part dealers in any market were using PPC (Pay Per Click) or SEM on Google, some are still not even using this, as a major or only marketing effort. What these awesome dealers discovered, was that by being the first in line they had a HUMONGOUS advantage over their competitors.

Today, it is almost 100% of all dealers spending money on Google’s powerful text-based ad tool, or they should be, and the only advantage a dealership may have is that they have more effective tactics and visibility in this crowded space. Remember the “Being first in line” analogy? Well, right now we are at the same point with Facebook advertising (not just social posting) that we were with Google PPC advertising six or seven years ago — dealers that spend money (and have a sound strategy) on Facebook have a HUGE advantage over their competitors.

Whether you are in the middle of a busy metro or in very rural market, auto part buyers from 25 to 54 are all over Facebook. In fact, with 1.49 billion members worldwide, and 22 billion ad clicks per year, Facebook is one of the few places where all of the different segments of your targeted audience all gather.

You don’t have to take my word for it. Look at this chart from an article published on MOZ.com, Why Every Business Should Spend at Least $1 per Day on Facebook Ads. 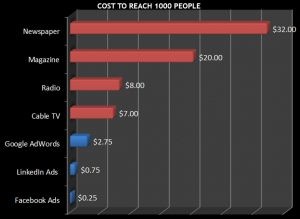 Auto dealers are spending tens of thousands of dollars on traditional media and are only reaching a part of their targeted market and can’t measure its effectiveness. I’m not saying to pull out of traditional mediums. They can all work together, as a matter of fact, I recommend it. I just think it is a bad idea to spend big bucks on traditional and omit Facebook all together.

You can target by behaviors, interests, demographics, connections, age ranges, languages or locations, and you can layer this criteria on top of each other to ensure you’re getting rid of any questionable out-of-market clickers. For auto part dealers, you can also add in Polk data to target same brand owners in your market that ARE NOT in your database. Sound like a good idea? I would think so.

Do I really need to quote statistics to convince you on the importance of mobile advertising? Knowing that even my grandmother is checking her profile on her Cell Phone? I don’t think so. That said, it is my opinion that Facebook delivers the BEST Mobile ad units going. They appear completely native to the Facebook news feed experience and if done right are incredibly engaging. Other mobile ad units are small, hard to read and really nothing but annoying and unlikely to influence a prospects behavior while surfing on the mobile web.

Reason #5 – The Most Accurate Cross-Device Targeting

If you are like me, and most others that are on Facebook, most of your time spent on the social network is on your phone. However, the rare time that you decide to log-in on another computer, Facebook takes the time and asks you to validate the device and browser you used via email. What you are really doing is allowing Facebook to target you on multiple devices.

So why is this important? Well, if someone visits your website on a desktop or laptop which they have told Facebook is connected to their account and you have Facebook re-targeting pixels on your site, then you will not only serve ads to that prospect while they are on Facebook on that desktop or laptop, but also when they are on the mobile app on their phone. Powerful.

If you are not advertising (I am not talking about social posting) on Facebook and you are an auto part dealer, stop what you are doing and find a way to include Facebook advertising in your budget this year. The longer you wait the worse off you will be.

I don’t know how connected you are into this world, so just in case you didn’t know, Facebook has a little brother, maybe you have heard of it, its name is INSTAGRAM. With over 104.7 million people using IG in the US, it makes no sense for you not to be showing your product on that gathering. The great thing of this is that Facebook has done this a lot easier for everyone, yes including auto part dealers, whenever you advertise (again no social posting) something on Facebook if you have your accounts link, it will also appear on IG increasing exponentially your exposure thus the amount of potential buyers.

Very Simple if you are not yet using the Social Networks in your marketing efforts, chances are you are losing more than just a like.

REQUEST A DEMO OF PARTSITES